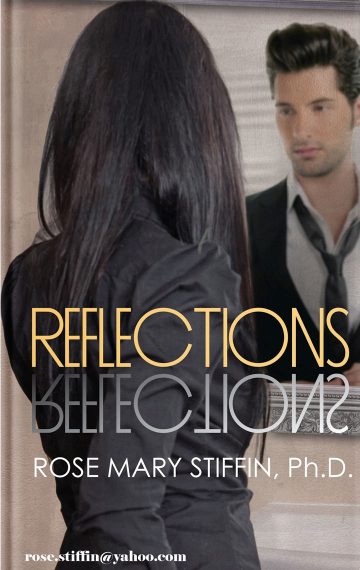 Warren Dwyer is a graduate student in computer engineering. He is brilliant, the spoiled only child of his doting but oft-times frustrated parents, as handsome as a model, and a drunk. But the innocent Cosby Tates sees only the obvious: he is tall, dark, and handsome. And she wants him, as only an eighteen-year-old innocent can desire an older man—with her total heart and soul.

She rescues him, drunken and oblivious, from a wedding reception and takes him home. Perhaps, he would have been grateful if, upon awakening the next morning, he had an inkling of who she is!

Ten years later, Warren is now sober, responsible, and junior partner in an expanding, successful bioengineering company. He is happily engaged to the beautiful photographer Dawn Redfield when he is assigned to attend a conference in Boise, Idaho. There, he sees the woman who has haunted his memories for a decade. But who is she and who is this little boy who, as Dawn claims, looks exactly like Warren?

Reflections is a beautiful summer read, full of diverse and inspiring characters who stay with you long after their stories are over.